In my personal labs, and in our classroom labs, we've been using Samsung NVMe SSD Pro and Evo disks (950/960/070) for many years with good result. But when Amazon announced a dang good deal, moneywise, just before Christmas, on Crucial NVMe SSD's (the CT1000P1SSD8 – Crucial P1 1TB 3D NAND NVMe PCIe M.2 SSD), I could not stop myself and asked my manager to order 15 of them, so we could upgrade the remaining classroom hosts from 512 GB to 1 TB. Shiny idea, right? 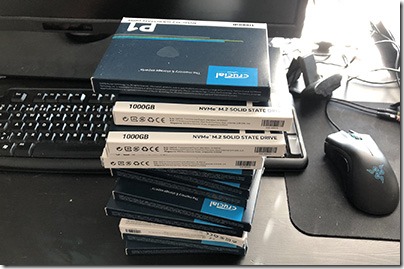 The 15 Crucial disks we ordered.

When reading up on the spec for the Crucial drives, I knew they wouldn't be exactly as fast the Samsung disks, but they should be good enough.

As you probably guess, I was dead wrong. In our i7 Optiplex 7040's with 32 GB RAM, the performance on the Crucial disks was literally SHAIT in comparison with the Samsung disks. On regular Diskspd.exe tests the new Crucial disks didn't even get half the speed on larger write operations. And just unpacking our classroom files on the Crucial disks, a ZPAQ archive with 200 GB of VMs went from taking about 25 minutes, to well over three and half hours.

Needless to say, after spending a good few hours with Crucial support, hoping there was a firmware or driver fix, we returned the disk, and bought the almost twice the price 1 TB Samsung EVO NVME SSD's, and performance is now back to normal.

Lesson learned is that the Crucial disks have some amount of fast cache with much slower storage behind it. Fill the cache and performance drops off a cliff.

The much shinier Samsung Disks.

Thanks for sharing this information!
Me and my employer have been in quite the discussion over exactly this subject.
All he cares about is saving money (obviously) and storage capacity, but I've been telling him they wouldn't perform nearly as fast as the Samsung's resulting in losing money over time… Because time is money. Also obviously.

I'll confront him with this info to hopefully finally change his stance and agree on getting the proper stuff..