During Microsoft Ignite there was an awesome session on the Windows 10 Setup Engine. It was the “Upgrading to Windows 10 In Depth” session presented by Aziz El Ouaqid which you find here: http://channel9.msdn.com/events/ignite/2015/BRK3307

In this post you find a summary of that session together with my own findings of the Windows 10 Setup engine.

If you are one of the lucky companies that are able to use the Windows 10 inplace upgrade process, you will find that for the very first time in Microsoft setup history, there is now a strong story around the process. E.g. well tested, and so far appears to work just fine.

An inplace upgrade is taken place by running the setup.exe or setupprep.exe on the running Windows 7 or Windows 8/8.1 system. The typical syntax is: Setup.exe /Auto Upgrade /Quiet /NoReboot with the optional /DynamicUpdate Disable for SCCM deployments, and /PostOobe and /PostRollback switches to specify locations for SetupComplete.cmd and SetupRollback.cmd. E.g. to be able to automate things when setup is either completed, or is rollbacked because of an issue.

Anyway, when running the inplace upgrade setup, it runs through four different stages, or phases.

Note: Windows 10 is capable to recover from failure in any of the four phases.

The inplace upgrade in progress (WinRE phase). The circle progress is overall progress, the progress info in the bottom is the individual phase progress.

This is where all the prereq checks and scans are happening. The various checks are part of the compatibility database which is continuously updated by Microsoft, Everything that happens in this phase is logged to C:$Windows.~BTSourcesPantherSetupact.log. The major actions are listed below and will dictate whether upgrade will stop, prompt for consent, or continue:

After rebooting into WinRE, the setup is now running offline, neither the old nor the new OS is running. In this phase the major actions are:

This is the first time the new OS is booting, and in this phase the major actions are:

Now Windows 10 is booted cleanly into new OS, in this phase the major actions are:

Even when the Windows 10 operating system is fully installed, there will be an option to uninstall it, and go back to the previous OS. Current thinking (May 7, 2015) is that you should be able to uninstall up to about 30 days, but that number may change until Windows 10 is released.

According to Aziz Microsoft is currently working with some 50 TAP (Technical Adoption Program) customers to create an Enterprise prereq check for Windows 10 upgrades that you can run without starting an actual upgrade.

The inplace upgrade should automatically cleanup the the Windows.old folder after X number of days (not yet determined). But you can still do it manually by running the Disk Cleanup or System Cleanup wizard. 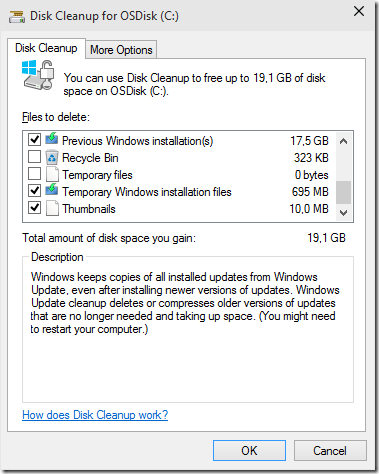