What is REALLY new in MDT 2013 Update 1 Preview

As you probably seen the MDT 2013 Update 1 preview was released on March 2, the official announcement by Aaron Czechowski lists the below list of features:

So is that it? Maybe, let’s take a closer look 🙂

What’s still broken in the preview

Before diving into the new features, here is a list of some key things that still not work. I was kind of hoping more of the many known bugs would be fixed, but so far nope… Hopefully they will be fixed in the final release.

Note: There is still much code in MDT 2013 Update 1 preview for XP / Vista / 2003 / 2008 deployments, even though some references was removed in this preview. It doesn’t really do any harm though, but it would be nice to see a complete cleanup. .

Minor Updates to the Deployment Workbench

Here is a list of the changes I’ve found in the Deployment Workbench: 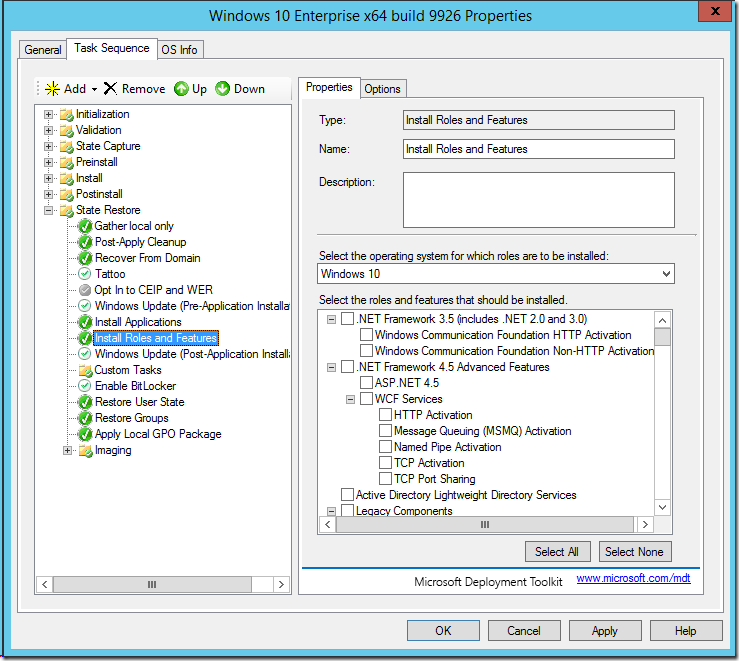 Updates to the task sequence templates

Here is a list of the changes I’ve found in the task sequence templates:

Updates to the Windows Deployment Wizard

Here is a list of the changes I’ve found in the Windows Deployment Wizard:

The standalone task sequence engine used by MDT 2013 Lite Touch has been upgraded to 5.0.7958.1000 which is the same as the ConfigMgr 2012 R2 (no CU’s) is using. This is major upgrade since the previous version used was 4.0.6487.2000 which is from ConfigMgr 2007 SP2. Because of the new version you will in addition to the updates files also see some additional files (CommonUtils.dll, ccmgencert.dll, msvcp100.dll and msvcr100.dll) being copied to the boot image.

One of the task sequence components.

When creating (updating) an offline media item, and MDT 2013 Update 1 Preview detects a WIM file larger than 4 GB, it will split it automatically for you into 4 GB chunks (well, 4095 MB chunks).

Findings: The really interesting part, which I consider kind of a design flaw, is that the media update action first of all splits the big WIM every single time you run the update, no matter if the big image changed or not. Second, it’s using ImageX.exe to do the split which is supposed to be deprecated (DISM does support split too). Third, it’s using a quite resource intensive workflow for splitting the WIM and update the media. MDT does the following when having the deployment share on a data disk:

Put it this way, you better have plenty of free disk space, and don’t deploy the image over the network while updating the media (and the opposite around as well).

The new split WIM support not working for UEFI-based media because the big WIM had one file larger than 4 GB in it.

The Update Media Content wizard detecting a large WIM file and splitting it.

If you review the MDT 2013 Update 1 preview scripts , you’ll find that most script updates are related to using the new GetMajorMinorVersion from the ZTIUtility.vbs script to handle versioning of Windows Operating Systems, or for supporting the new task sequence engine, or for the split WIM support. But I did notice another change as well:

You can automate an in-place upgrade to Windows 8.1 by using the "setup.exe /auto:upgrade" command, then you don't need to change any boot order. With MDT 2013 you can also do a computer refresh, if you need to wipe them completely clean. That process can also be done without changing BIOS.

Other than that, for bare metal deployments (PXE / USB) you can just select that boot option at deployment time, without changing the BIOS boot order.

HI Johan,
I must really commend you for the beautiful job you are doing. more grease to your elbow.. my question goes thus, in my organization, we have upto 60 PCs with windows 8 running on them but trying to upgrade to windows 8.1 by automating the deployment.. how can all the systems boot from the network/deployment share without having to configure the booting order of the system one after the other to boot from from the network.
Thank you.

I agree with Tamas.Herczeg. I don't think MDT in general will be the number 1 priority from the System Center team. Too bad though, because the functionality in MDT really nails a lot of the features in SCCM. I could be wrong though. 🙂

Seems to me that MDT is not a priority anymore since taken over by the System Center team. No improvement, no bug fix, only minimal maintenance. Too bad. Also, it doesn't seem to support PowerShell 5.0 Feb Preview yet. Throws an error on my server: "PowerShell not installed".