A new feature in USMT 10 (from the Windows 10 ADK technical preview) is it's ability to migrate 3rd part drivers (and apps) via the new provisioning packages in Windows 10. I'm not sure why anyone would migrate drivers this way (yet), but it least it caught my interest enough to play around with the the feature 🙂  Another interesting thing is that there is a ARM version of USMT as well.

Note: The drivers capture feature in USMT 10 is quite similar to use the Export-WindowsDriver cmdlet that was introduced with Windows 8.1, except that it stores the drivers in a WIM file (provisioning package, PPKG extension,). In the Windows 10 ADK Technical Preview, the PPKG (WIM) files that are created are not compressed. I don't know why, but I hope that will change in the released version.

There is a bunch of new command line switches to scanstate, but the /ppkg /drivers and /apps controls the apps and drivers migration feature. The /apps feature seems to be broken in the Technical Preview, but the /drivers feature is working fine in my testing.

Disclaimer: Since drivers are normally handled by the deployment solutions, I haven't yet figured out any real world usage for this new feature. Please comment below if you find this feature useful (and why).

Anyway, the command line switches that controls apps and drivers migrations are the following:

To capture drivers from a system and create a provisioning package you run the following command (the /ue switch is optional but I didn't want to capture any profiles):

When running this on my machine, it generated a PPKG file of 1.63 GB. 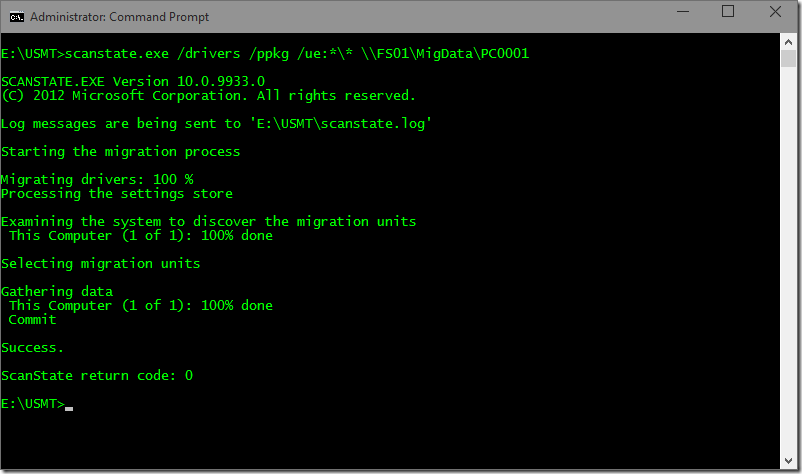 The output from running scanstate with the new /drivers switch.

Looking into the drivers provisioning package

If you seen my earlier video on create provisioning packages using Windows ICD you know the PPKG file is really just a WIM file, meaning it's easy to either mount with ImageX/DISM. For most of the provisioning packages, but not all, I have also been able to use 7-Zip to open the file since it can open some WIM files.

As I mentioned before, when running scanstate to capture the drivers on my machine, it generated a PPKG file of 1.63 GB. As I mentioned earlier, in the Windows 10 ADK Technical Preview, the PPKG files that are created are not compressed (don't know why), but I hope that will change in the released version.

After mounting the PPKG (WIM) file to E:\Mount, you see the following:

In the Drivers folder, there is a bunch of subfolders, one folder for every drivers, and also a Driver.xml file holding a list of all drivers.

There is a snippet of the Driver.xml file.