Earlier today I noted a particularly interesting tweet in the stream. It was from Keith Garner, claiming that the latest Rufus version supported UEFI with NTFS based volumes. That made me wonder if that could be used deploy a 7.13GB Windows 8.1 image, via USB, to a machine enabled for UEFI.

Note #1: In my testing I got the best result when configuring the various machines tested for native UEFI boot. The machines also need to have a fairly updated UEFI support. Legacy UEFI versions like the BIOS in HP 8560w will not work, you need to have real UEFI support (not just the HP experimental unsupported stuff).

Note #2: To use the UEFI:NTFS Bootloader, Secure Boot must be turned of during deployment, and enabled once the machine has booted into Windows for the first time.

This UEFI/NTFS hack obviously also blows away the 32 GB FAT32 volume limit on USB sticks. I just deployed a machine using a 128 GB USB stick created from a MDT 2013 media (ISO) and Rufus.

The special partition created by Rufus. 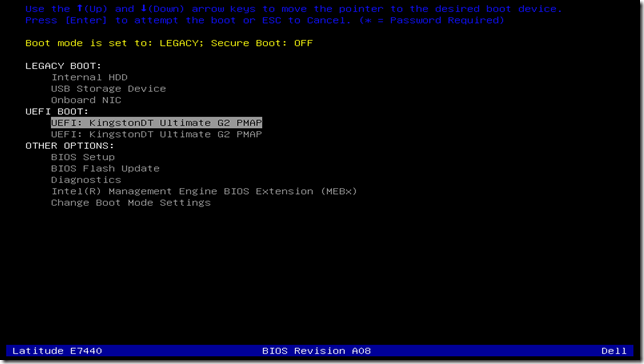 Does this support Secure Boot as well? I am in a space where I am required to leave this option on.

No, using the Rufus UEFI:NTFS bootloader does not support Secure Boot during deployment, you'll have to enable that after Windows have been deployed. I'll update the post with that info.

Here is Rufus info on the topic: https://github.com/pbatard/rufus/wiki/FAQ#Why_do_I_need_to_disable_Secure_Boot_to_use_UEFINTFS