Tomorrow (Monday October 27), TechEd Europe 2014 starts in Barcelona. In this post you find all my sessions as well as sample files from those sessions (updated as the event goes along). 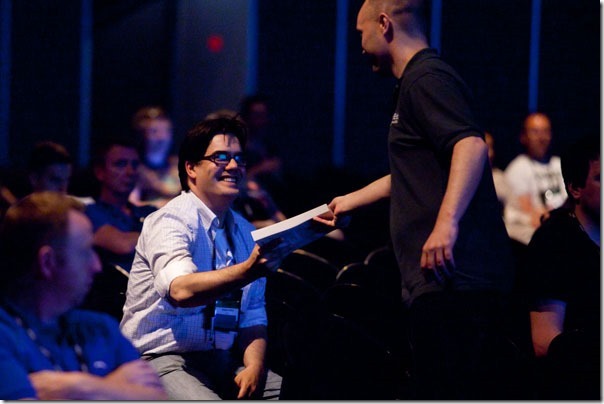 From TechEd 2013 in Madrid, handing out a book in reward for a good question.

Here is the my list of sessions at TechEd Europe 2014 in Barcelona. I would love to see you there, and don't hesitate to say hi!

Sample files will be added to each sessions, so watch out for updates.

The uber-demo spaceship has landed… Join Johan Arwidmark in an hour (plus) live demo on how to build a Windows deployment solution, based on MDT 2013. Learn about the new features in Microsoft Deployment Toolkit 2013. Learn about deploying to EUFI enabled hardware. Work with drivers, updates, applications, configuring BitLocker-all for the enterprise network. This is notes from the field, lessons learned from real-world Windows 7 and Windows 8.1 deployment projects.

Check to see if the TPM is enabled (by Tim Mintner)
http://blogs.technet.com/b/deploymentguys/archive/2010/12/22/check-to-see-if-the-tpm-is-enabled.aspx

Meet Johan Arwidmark taking Microsoft Deployment Toolkit 2013 (MDT) to its outer limits. Learn about the new features in MDT 2013 and how to customize it to fit your organization's needs. You can expect a lot of live demos, tips, and tricks.

The script that exported task sequences was gathered from the following post:
http://trevorsullivan.net/2010/05/13/exporting-configmgr-task-sequences (by Trevor Sullivan)

The script that imported task sequences was gathered from the following post:
http://www.david-obrien.net/2012/09/29/how-to-backup-restore-your-tasksequenceconfiguration-manager-2012-and-powershell (by David O'Brien)

The New-TaskSequence.ps1 script that created native task sequence in ConfigMgr 2012 was gathered (and then modified a bit) from the following post:
http://www.jamesbannanit.com/2014/09/create-an-os-deployment-task-sequence-in-configuration-manager-2012-with-powershell (by James Bannan)

If your job duties include deploying Windows 8/8.1 and you would like to do this using the FREE tools provided by Microsoft, this session is for you. During the session we cover the basic steps to install the solution and configure it. We explain things like reference images, Windows Deployment Services, Microsoft Deployment Toolkit (MDT), Lite Touch, new computer scenarios, refreshing old computers, and how to replace old computers while keeping the user data and re-installing applications.