Hoping for a fix to the Windows 8.1 GA image

For those of you being involved in a few Windows 8.1 deployment projects already (I have), you have probably stumbled into that setup behaves a bit differently in Windows 8.1 than it used to do in Windows 8. So far no fix has been announced, but I'm hoping there will be one-.

Shorthand, Microsoft kind of broke the Windows 8.1 GA image, and the result is that the Start screen items are missing for the built-in Administrator account, which of course is a royal pain when you want to prepare a reference image.

So far Microsoft seems not very interested in fixing this issue, despite several customers reporting the bug. Instead of providing a fix, they recommend Enterprise customers to ditch their current deployment methods and start using audit mode when preparing their reference image. This is of course beyond stupid. Most (if not all) enterprise organizations, are not using audit mode during their deployment. It's more or less only OEM's and system builders that uses that feature of the Windows Setup.

Disclaimer: I don't know if using the original Windows 8.1 RTM release is supported by Microsoft. I only know it works, and doesn't have the Start screen issue.

Also, for a really interesting read, and for some additional background info to this post, I recommend reading the following forum threads:

The Windows 8.1 GA image Start screen, with a bunch of items missing. 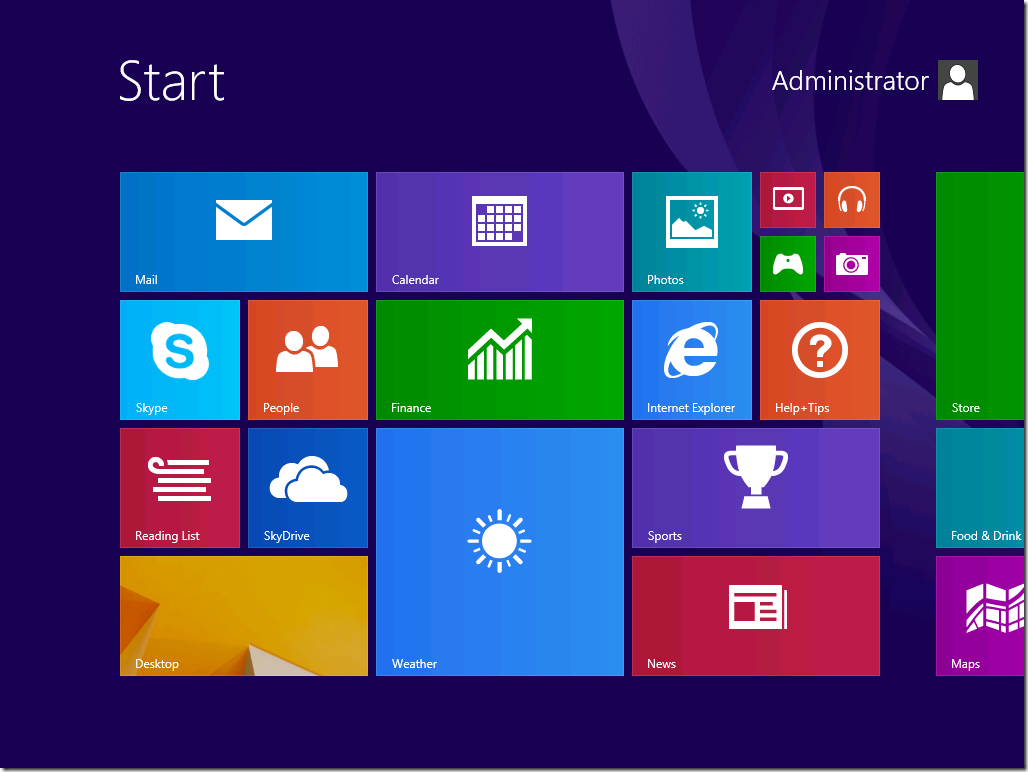 What the Start screen should look like (e.g. from the Windows 8.1 RTM release, before GA).

Not really, it's not MDT that is the problem, it's a bug in Windows 8.1…. I've been told it's fixed in the upcoming Windows 8.1 Update, and that Microsoft will publish a KB on how to fix it for the Windows 8.1 GA version.

Is it posible to create an windows 8.1 image on sccm and deploy that image with MDT 2013, to get around GA image problem?

The only workarounds I know of is either to use the non-GA image (but still RTM), or to create another user, and export/import the start-screen layout. I haven't seen a hotfix yet.

Is there any update/work-around/fix yet on this issue from Microsoft (Start screen items are missing for the built-in Administrator account)?

Ok, so you didn't have the image updated via WSUS before sysprep? The rollup updates should all be available there.

Thanks for posting back,

Thanks for your answer. Yesterday I installed the GA updates kb2883200 and rollup kb2884846 before sysprep. One of these updates solved the problem.

I'm afraid you have to file a bug on that one. There was a similar bug for Swedish in Windows 8, but that was fixed in an update.

Sorry, one more question: How can I start troubleshooting this strange behavior? Windows 8 didn't have this problem so I think I miss only a little.

Hi! Did you ever have the problem that after sysprep the language of the built in apps are in a different language? We deploy the german version of Windows 8.1 Enterprise. The apps are definitely in german language. After sysprep and deploy the apps are english. I pull my hairs out. The answerfile is set to de-DE in all phases.

Is this relating to the same bug?

You can absolutely use the Export/Import-StartLayout to export Start-Screen settings that you have customized.

Thanks for the heads up Johan, would the Import-StartLayout cmdlet be a workaround for this ?

Thanks for the info Johan. I was just wondering this issue the other day….didnt cross my mind that this is a bug.

Hi Johan,
I have same issue. MSFT should fix and we cannot change the image engineering process for a bug.
Let us push for it.