The goal of this article is to show you how to move from managing ConfigMgr driver packages to something much more dynamic. You will no longer need to edit your task sequences with additional driver package steps. Sound fun? Yes, yes it does.

Recently at my local System Center User Group – MNSCUG.ORG – I was told that the cool kids don't use the Driver Packages node anymore..while I was demonstrating some tools that automatically download and import driver packages into the Driver Package node!!  Awkward.

The reason why ConfigMgr (SCCM) Driver Packages aren't so cool is the amount of data that gets put into the database.

Before we begin I must acknowledge and thank the following people:

Generate XML with list of packages that contain drivers

Download all of the drivers packages to separate folder using a standard naming convention. Here is an example of creating folder for Driver Source > Operating System > Manufacturer > Model

Create a package for each driver model using a naming convention such as this:

The packages will just point to a source folder that includes the drivers as shown below. You do not need to create a program.

The driver packages created in the ConfigMgr admin console.

Now that there is a standard naming convention for the Driver Packages, it is time to write a PowerShell script to generate an XML with the PackageID and Package Name. This is done outside the task sequence because the task sequence does not have access to query ConfigMgr.

In ConfigMgr create a package called "OSD – GetDriverPackage" pointing to the above source folder. You do not need to create a program.

When I teach PowerShell I always tell people that getting your script to do what you want is about 60% of the work. Making sure that it will always work and including logging takes up the other 40%. Error handling and logging take a long time. Having a reusable template should be viewed as a requirement.

Kim has a logging script called Log4Net. I already use a template that you can see below. In either case, pick something that is repeatable so that all your scripts include error handling and logging.

The next step is to automatically run the Set-DriverPackageXML.ps1 script anytime a ConfigMgr Package with the name "Driver – %" is created, modified, or deleted. To do this run the following script to create the WMI EventFilter, CommandLineEventConsumer, and the FilterToConsumerBinding.

NOTE: You could use ConfigMgr status filter rules, but you would need to create one each event (delete, modify, and create). Also, the ConfigMgr Status Filter Rules don't allow for any filtering. So, the WMI Eventing is the way to go

Open the following script as administrator (elevated rights) and run it.

Time to test it out

Create a new "Drivers – %" package. Look for an updated "TEE-CM1SCCMPackages$OSD – Get-DriverPackageDriverpackages.xml file. If you don't see one it is time to troubleshoot. Open the C:WindowsTempSet-DriverPackageXML.log and investigate. The package also should have a new updated distribution time.

Modify the name of a "Drivers – %" package. Look for an updated "TEE-CM1SCCMPackages$OSD – Get-DriverPackageDriverpackages.xml file. If you don't see one it is time to troubleshoot. Open the C:WindowsTempSet-DriverPackageXML.log and investig
ate. The package also should have a new updated distribution time.

Delete a "Drivers – %" package. Look for an updated "TEE-CM1SCCMPackages$OSD – Get-DriverPackageDriverpackages.xml file. If you don't see one it is time to troubleshoot. Open the C:WindowsTempSet-DriverPackageXML.log and investigate. The package also should have a new updated distribution time.

So far, what has been accomplished is the automatic updated of the Driverpackages.xml file whenever a SCCM Package with the name "Drivers – %" is created, modified, or deleted. Also, the package containing the XML file is automatically refreshed on the Distribution Points.

Get the driver package during a task sequence

Drivers in the task sequence.

Save the Get-DriverPackages.ps1 script (link below) to the "OSD – Set-DriverPackageXML" folder. At this point that folder will have two PS1 scripts and one XML.

The script will then compare the findings with the names of the Driver Packages. If a match is found, the OSDDownloadDownloadPackages Task Sequence variable will be populated with the PackageID. 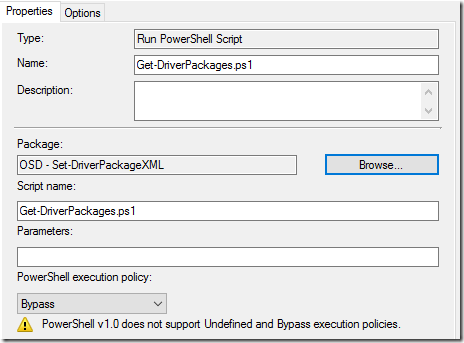 The Get-DriverPackages.ps1 script added to the task sequence.

Now that the PackageID that contains the required drivers has been identified, it is time to download them to C:Drivers

Notice it is set to download the "Drivers – Empty for default download" The PowerShell script from the previous step will change the package from "Drivers – Empty for default download" to a true driver package if one was found. This is done by replacing the Task Sequence variable OSDDownloadDownloadPackages with the PackageID that matched the model, architecture, and operating system of the device.

The last step is to run DISM to inject the drivers.

You create a Run Command Line Task Sequence step with the following: 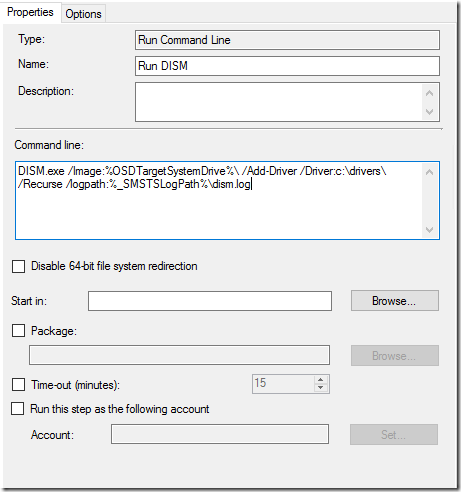 And there you have it. 21 pages and over 400 lines of code later we are done! Now you will never have to modify a task sequence and add driver packages to it. You also are keeping your SCCM database clean by not importing driver packages. Finally, you have created a very dynamic and 'cool kid' way of downloading and importing drivers during OSD. This may even qualify as shiny!

I know this is an old post and I was wondering if it still works for CB 190*? And where can I see the filter if I wanted to check it with WMI, because I cannot see it created?

The It should still work, but I haven't tested it in a while. I have switched to use the Modern Driver Management solution from the scconfigmgr team: https://www.scconfigmgr.com/modern-driver-management/ For questions on this script, you might want to reach out to Matthew, @TheEmptyGarden on Twitter / Johan

A Feiner
Reply to  Johan Arwidmark

Thanks,I am trying to remove the WMI filter since it seems to cause the task sequence to abort without an error. I will contact Matthew