For more information about installing the hotfix, this blog is a must read: http://blogs.technet.com/b/configmonkey/archive/2013/11/13/deploying-configmgr-hotfixes.aspx

You may also run into that the network account cannot access the server. See later in this guide for workarounds.

Testing the site database for upgrade 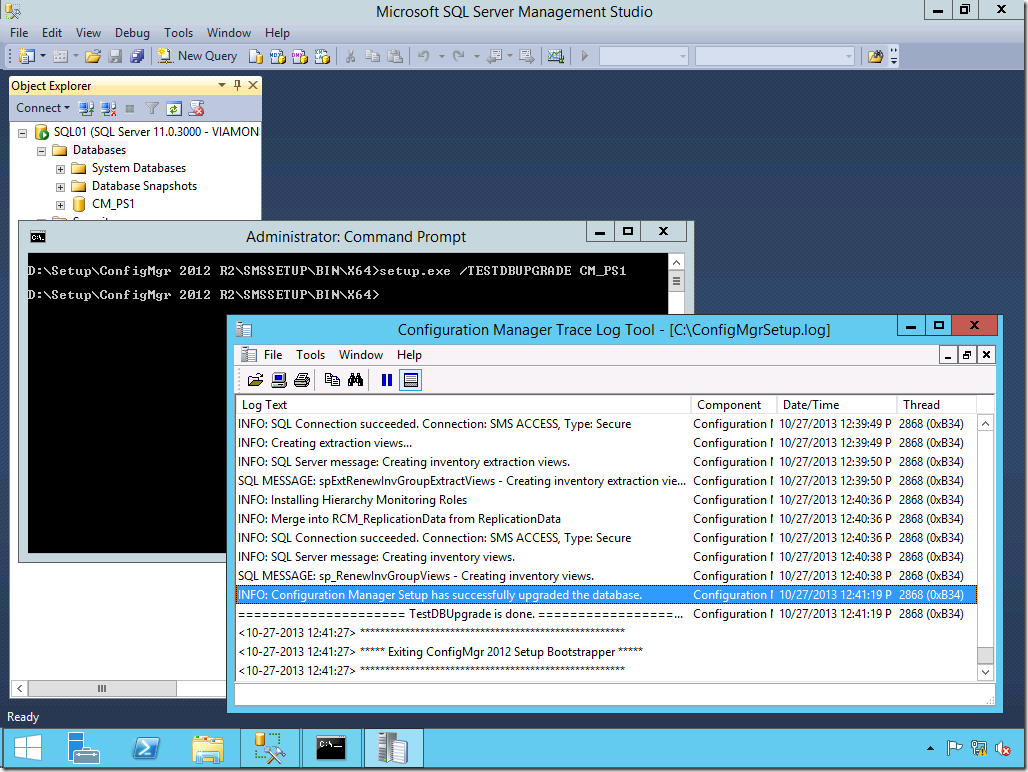 Successfully testing the site database upgrade after restoring it on a separate SQL server.

To uninstall ADK 8.0, first close all programs (especially the ConfigMgr admin console) then simply go to Programs and Features, and uninstall ADK 8.0 from there. After the uninstallation, make sure the Windows Kit folder in C:Program Files (x86) was deleted by the setup. 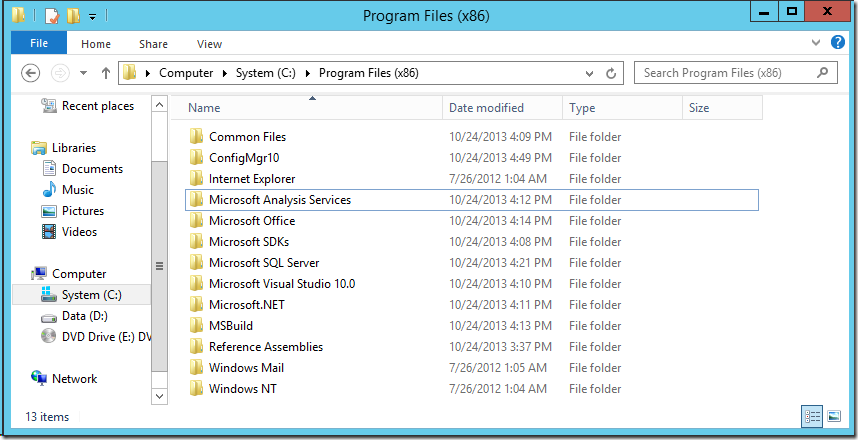 To install ADK 8.1, make sure you have have downloaded the ADK 8.1 setup files after October 17, 2013. This since Microsoft re-released the ADK 8.1, and the re-release contains important updates. If you want to download ADK 8.1 before installing, simply select that option during the wizard, or run adksetup.exe /layout "D:\Setup\ADK 8.1".

During the ADK 8.1 setup, select only the following components: 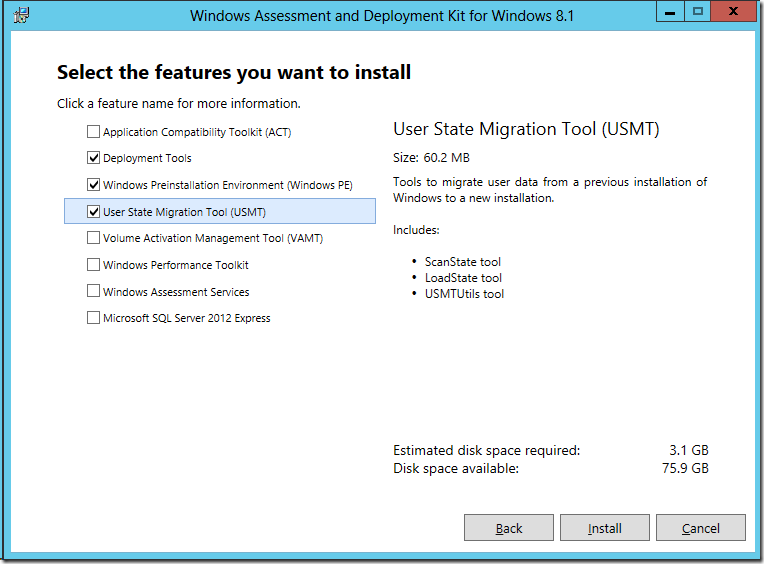 After ADK 8.1 is installed, you are ready to install ConfigMgr 2012 R2. Run the setup, and select the Upgrade this Configuration Manager site option. 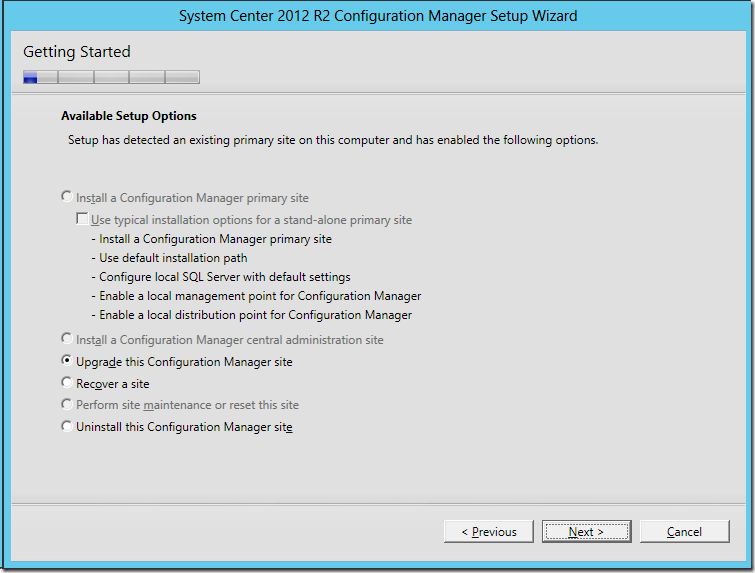 To install MDT 2013, first close all programs (especially the ConfigMgr admin console), and the run the MDT 2013 setup with the default settings. Once the setup is complete run the Configure ConfigMgr Integration wizard and select to install the MDT extensions. 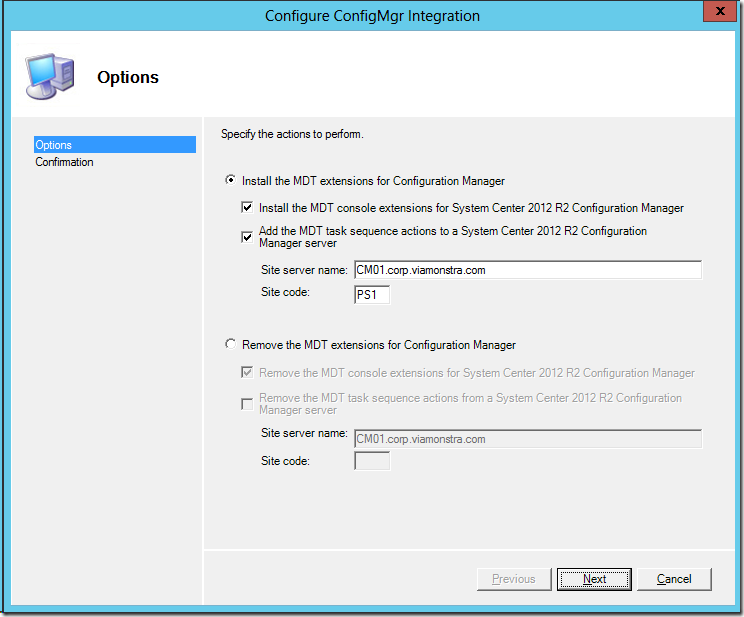 After ConfigMgr 2012 R2 and MDT 2013 are installed you need to do a few more things to make OSD work again. In this section you do the following:

The ConfigMgr 2012 R2 upgrade process does not upgrade your existing custom boot images, so you need to create two new WinPE 5.0 boot images using the MDT wizard (one for x86 and one for x64). WinPE 5.0 is required to support Windows 8.1 and Windows Server 2012 R2 deployments. Don’t forget to enable the boot images for PXE if you are using that. 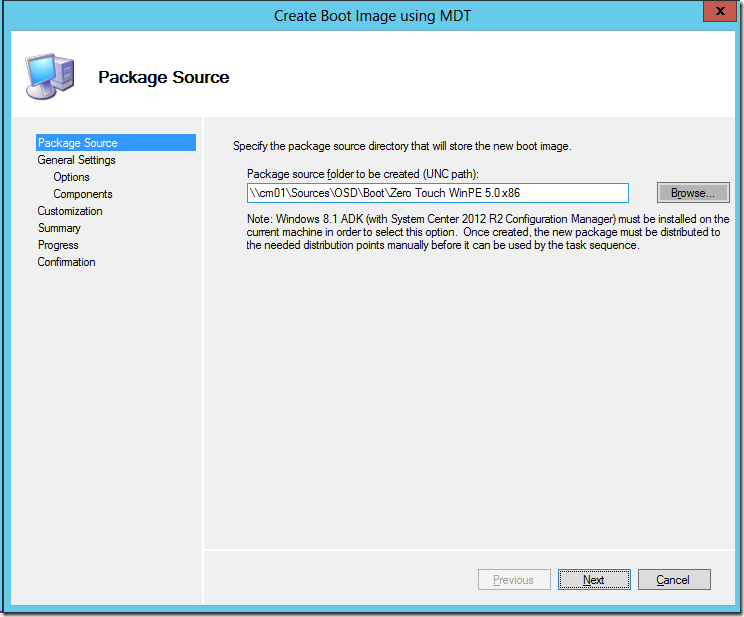 Create one or more task sequences

After creating the task sequence, and the MDT 2013 package, don’t forget to distribute it. 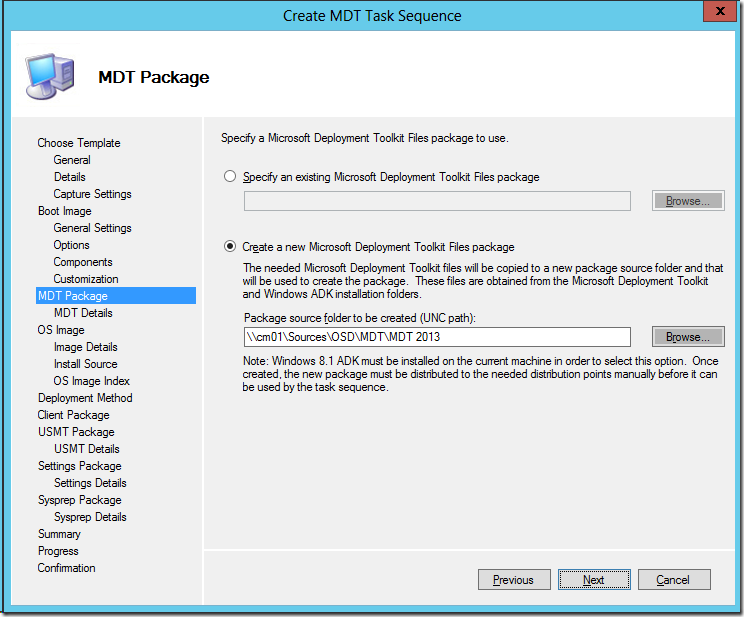 Sometimes after an upgrade to ConfigMgr 2012 R2 upgrade, the network access account does not work anymore. Workarounds are: 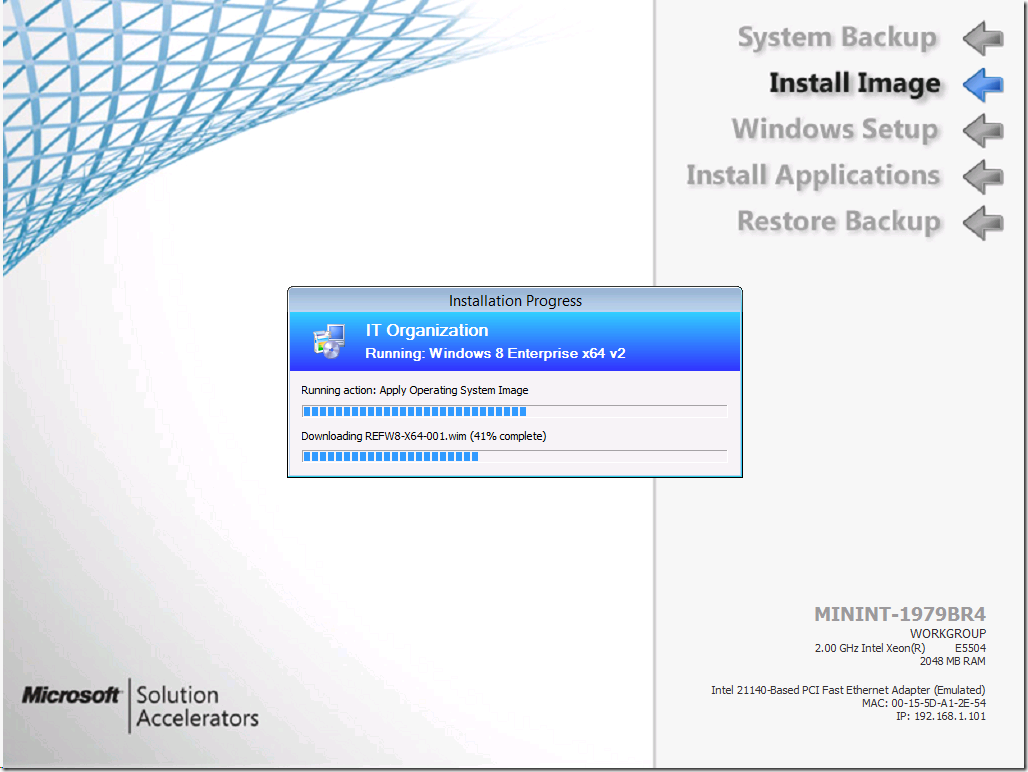 There are unsupported hacks you can do the ConfigMgr 2012 boot image to able to add it to the normal WDS you already have. Meaning you have a single PXE for both MDT 2013 Lite Touch and for ConfigMgr 2012 R2. Might be useful for a transition period.

Linked Replication Shares should never, ever, be used for anything 🙂

Johan First off thank you for the guide; I've been following your work for the past 4 years. I have a question about a scenario in our environment. We have a already established MDT/WDS server for image deployment. I just setup a SCCM server, and I want to integrate it with MDT. The trouble with that is, our PXE is already setup on our WDS server; and so is our Deployment Share. What do you suggest to get them to work together without changing where the PXE server is at. I am unsure how to proceed without doing harm or… Read more »

Oupps, I missed replying to this, sorry… Currently, the best free guides are the guides from Niall Brady, at windows-noob.com.

Can we use parts of this guide to install a new SCCM 2012 environment or can you recommend any other guide?

You can keep the same CustomSettings.ini but you may have to update the Unattend.xml template depending in what OS you deploy.

As far as WinPE 5.0 goes, yes Windows 8.1 drivers, but often a Windows 8 driver will work.

1) Do you need to recreate the customsettings package (I use the admin DB)
2) With the new WinPE5.0 boot image I assume you have to update any model specific drivers – which version? – is it Win 8.1?

A pleasure to return to the community Johan, especially after your excellent TechEd session last year!

Thanks for the note on access content directly from DP, I have updated the article with that info

Haven't tried hiding the progress bar, but this does not apply for standalone MDT deployments, only ConfigMgr 2012 R2.

I've switched to using "Access content directly from distribution point" to skip the download section – on our gigabit network I apply a 8GB WIM in 5 mins. Only downside is that you obviously can't use multicasting with this enabled, not a big deal for us as we rarely mass-deploy a bunch of new machines all at once. I'm considering leaving this enabled even after the fix since this is actually faster than 2012 SP1.

You can fix the NAA bug the other way around too.
IE create a seccond Dummy user and add that as an NAA.
After that you can remove it again and SCCM will now find the original account

Ok fixed it – silly mistake.
Only one of my task sequences was advertised, and it had 'native' boot image.
After advertising remaining ts it started using my boot images.

For me WDS starts ok, it works relatively good so far, the only thing however no task sequence is shown in the OS deployment list on client with my boot images, it only works if I assign native boot image. If all my ts have assigned boot images (created as per above manual, from latest ADK and MDT2013) the PXE fails (it will not display: press F12 to PXE boot).I have both x86 and x64 versions of all boot images, all have:Data Source -> Deploy this boot image from the PXE-enabled dpThis setting is not set by default, after setting… Read more »

We had similar issues with PXE after upgrading to 2012 R2. The WDS service did not start. After reinstalling PXE on the distribution point the Distmgr.log contained error messages like:

Reinstalling Wimgapi from smswimwimgapi.msi on the site server solved the issue 🙂

PXE works as long as the console isn't installed on the primary site server. Something to do with wimgapi.msi . Over to you Redmond…

Thanks for the comments, I will be posting back any solutions to issues when I come accross them…

Curious to see if perhaps this same driver is being used in your environment, or if a similar approach resolves the issue you are seeing?

On the pxe issues seem to get a 0x8007013 error about the msi can't be enumerated. The cert says it expires in 25/07/2013 . I may be barking up the wrong tree and it still doesn't explain why it works on a seperate dp. Is it because the console is installed on the primary site server, usually?

And far as cmtrace goes, yes it's included in ConfigMgr 2012 R2.

Hi Anders,
Great idea… The short answer: As long as it's the same sql version, it' just adding a backup/restore step of the site server to the new OS before starting the upgrade…

This might be a simple question, but is cmtrace included with 2012r2 installation? Or i need a toolkit package?
Thanks.